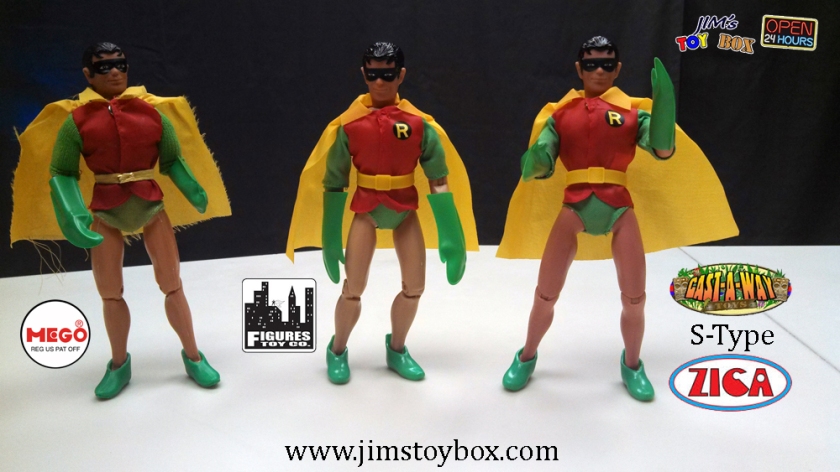 I thought it would be fun to put all of these fellow’s together, side by side and chat about them for a moment. Our subjects in case you didn’t know are Robin the Boy Wonder in three different incarnations.  In this article I’ll do a basic breakdown of the nuances of each.

Up first is the original Mego Robin. This particular specimen is the T-2 body style which has been the standard that most good re-Mego’s have followed (Yes I am dissing you Mattel, go back to your corner and slouch and as you recall, you didn’t even bother making a Robin.).

Nothing will ever replace this wonderful feat in toy engineering for me. No matter how good a reproduction may be, nothing will ever match this version note for note. But it is clear to see this fellow has been loved quite a bit over the last few decades. While the gloves are reproductions everything else is original Mego including the internal rubber bands that hold him together.  Actually this Mego Robin is my daughters that she has been playing with for the past couple of years. Don’t worry Kaitlynn, Daddy will bring him home once I’m done with this article.

Next we find the Figures Toy Company reproduction. In their marketing they use the term “Exact” however this is not the case. There are noticeable color variations, Robin’s head is smaller while his neck is longer, the internal rubber bands are almost too tight which has caused some breakage issues for some folks and the body is made of a lighter weight plastic. With all of that said though, none of those are damnable offenses.

I consider the color variations not much different than what can be found in Mego’s original run of the World’s Greatest Super Heroes.  As far as the head size, to the casual observer and non- Mego collector this is most certainly a passable facsimile.  The rubber bands are what they are and I’d almost be willing to bet that FTC is going to get this resolved as it would be the poor business plan to have to keep replacing bodies all the time, which I hear they have no issues with. As far as the lighter weight plastic this isn’t a bad thing. If not for the super tight rubber bands these bodies are actually quite durable. Again I would like to take this time to publicly commend Figures Toy Company for having really turned their quality ship around. Bravo to you!

And our final specimen is the S-Type body from the combined efforts of Castaway and Zica Toys outfitted in the Figures Toy Company’s Robin accessories and head. While I love the body as a whole and raved about it in the video I posted earlier there are two issues that I would like to point out. The first is purely aesthetic. The S-Type is just different enough from the T-2 body that it does stand out as being just that, different. I’m not saying that’s a bad thing, I’m just saying.

And secondly the legs and arms are not as beefy as the T-2 or the FTC facsimile of the T-2 body. This is not a huge deal BUT the oven mitts will slide right off with little provocation and the shoes are loose. Again none of these are terrible flaws and in fact this one is the most playable. I even offered it to my daughter but Kaitlynn is a creature of habit and loves her “old Robin” just fine.

In the end I feel I’ve shared with you three examples of some great toys that hit on numerous positive levels.  The negatives that were pointed out were merely observations that I make as a lover of these toys. It does sadden me however that I didn’t have a Doc Mego or EMCE example to post along with these as the good Dr. will always in my eyes be considered the champion of the Mego cause and without him none of this resurgence would have happened.

Jim's Toy Box features programming that is inspirational, uplifting and motivational all the while offering encouragement to those who wish to make the most of this life in preparation for the next. View all posts by Jim Bumgardner

How I fund this operation.

That moment when it all makes sense… - Jim's Toy Box

The links below will take you to Amazon by way of my Amazon Associates Affiliate ID. Full disclosure; I do receive a percentage of these sales and I greatly appreciate you shopping via the Toy Box.